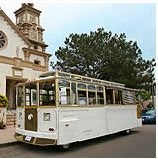 Especially when it comes to choosing a bridal show!  A large wedding expo is the best place to see all of your options in one place.  At the Bridal Bazaar you'll find a variety of vendors for over 40 categories of wedding goods and services.  So you'll find things that you won't see on-line or at smaller shows...like the White Wedding Trolley! Our exhibitors also represent the full pricing spectrum so you won't just meet the most expensive vendors in town, you'll meet great vendors from value priced to high end and everything in between.  When it comes to spending your time and your money wisely, the beautiful and big Bridal Bazaar is your best bridal show choice!

With the April 21st show still seven weeks away, 140 booths have already been claimed by San Diego's best wedding professionals.   We don't like to boast, but that's more than twice as many vendors as participated in the little hotel-based shows that have happened over the past month or so.   And we're not done!  New exhibitors are signing up daily.  So, as always, San Diego couples will find more inpiration, more ideas, more information and more choices at the Bridal Bazaar!  We'll  see you there -- April 21st at the Del Mar Fairgrounds.